ATLETICO MADRID are trying to avoid paying £34million for Antoine Griezmann – by playing him just 28 minutes per game.

The 31-year-old star is currently on loan at Atletico from Barcelona but has a contract full of clauses.

Atletico will have to pay £34million to buy him permanently if he plays more than half of his games this season.

This obligation is only met if he plays a full 45 minutes of football in half of the games.

UOL report that to avoid activating the clause, Atletico are making sure to limit his playing time.

The first two LaLiga games saw him come off the bench at the same time and play for exactly 28 minutes. 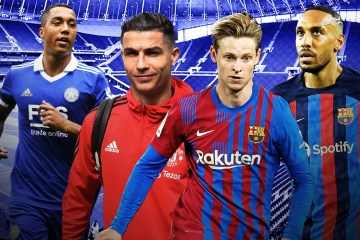 In their last match at Valencia, Griezmann’s time on the pitch was slightly lower as he appeared in the 64th minute for the remaining 26 minutes of the game.

He scored two minutes after coming off the bench against Valencia, while the opener at Getafe saw him score 15 minutes from time.

The only game he failed to make an impact in was the home loss to Villarreal where Atletico had a player sent off.

Most read in the Premier League

This means Atletico started the season with six points from nine, with Real Madrid and Real Betis the only teams to make 100% starts.

Griezmann’s parent club Barcelona remain unbeaten on the pitch, but off the pitch the club have continued to be mired in problems.

Along with their creative attempts to ease their financial troubles, the club have also come up against Frenkie de Jong and Martin Braithwaite over unpaid wages and contract terminations.